Link Either by signing into your account or linking your membership details before your order is placed. Description Product Details Click on the cover image above to read some pages of this book! Napoleon Passion, Death and Resurrection In Stock. Napoleon the Great. Napoleon The Man Behind the Myth.

Are you sure you would like to remove these items from your wishlist? But just three months later, his army had dragged themselves back through torrential rain and ankle-deep mud to the Portuguese border where their campaign had started eleven months earlier. Both the failed siege and the retreat that followed involved stories of endeavour which embrace all that is best and worst in human nature.

Deeds of great courage and humanity were juxtaposed with cruelty, despair and the terrible excesses of indiscipline.


By reconstructing events in close detail, and by bringing together [many] primary sources, she gives a vivid account of what happened and why. Wellington himself recognized the mistakes and miscalculations that led to the potentially catastrophic situation in which he placed his men. He described it as his 'worst scrape'. Yet most of the letters, journals and memoirs that have survived praise the skill with which he saved Britain's only army from disaster. Carole Divall weaves together Wellington's despatches with the eyewitness testimony left by British and Portuguese officers and men, by civilians, and by the French.

A fascinating, multi-layered impression emerges of the siege of Burgos itself and the sequence of manoeuvres that preceded it. She describes in authentic detail the tense decision-making and the misjudgements that were made on the allied side and the headlong retreat that followed as the British fled from two French armies that threatened to trap and destroy them. Carole Divall's in-depth study of a pivotal - and neglected - episode in the Peninsular War gives a fascinating insight into the character of the fighting, at every level, and into the strengths and weaknesses of Wellington's command.

This is Carole Divall's third book, the first two having dealt in detail with the 30th Regiment, and this time she concentrate's on the latter stages of Wellington's campaign of , from his advance from Madrid on Burgos and his subsequent retreat. 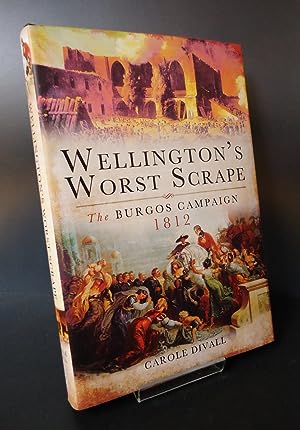 Using letters and memoirs from participants on both the British and French sides Carole paints a vivid picture of this pivotal campaign, one where Wellington showed what the British forces could do, but also showed it at its worst during the retreat. It led ultimately to the successful campaign of and the French being pushed out of Spain. Carole has presented in this book part of a campaign which has been largely overshadowed by Wellington's victories at Salamanca and Vittoria.

This is an excellent book that fills a gap in the usual telling of the war in Spain and Portugal and one worth having for anyone interested in the war in Spain. Wellington may have been over-confident following his successes at Ciudad Rodrigo, Badajos, Salamanca and Madrid. Carole Divall brings the subsequent story to life brilliantly with a very wide range of personal accounts and a logical analysis of events. Highly recommended. Carole Divall is an English teacher who has a special interest in military history, in particular the history of the British army during the Napoleonic Wars.

She has published articles on regimental history, on the workings of the army of Wellington's time and on aspects of the key campaigns. Her most recent publications are Redcoats Against Napoleon and Inside the Regiment, two studies of the officers and men of the 30th Regiment during the Revolutionary and Napoleonic Wars, and Napoleonic Lives.